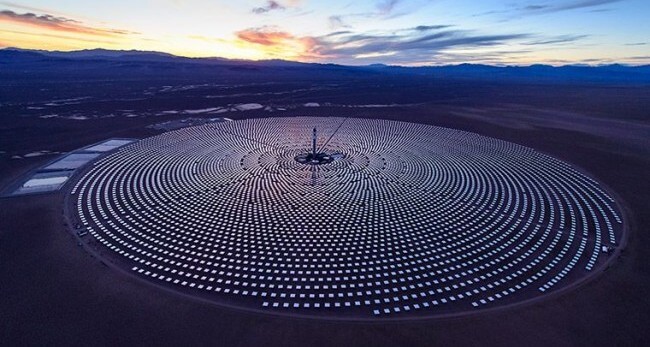 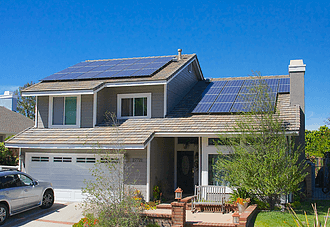 Take advantage of lower energy costs year round while helping out the planet. Contact us today and see how much savings you can gain by going solar!

Smack in the middle of the Nevada desert sits the Crescent Dunes Solar Energy Facility, one of the greatest green energy technological marvels in the world today. The facility is located outside the town of Tonopah, a small town between Reno and Las Vegas. The sprawling complex, which looks and sounds like an invention picked from a science-fiction novel, covers 1670 acres and it comprises of 10,347 mirrors, each the size of a billboard.

The mirrors are designed to move silently in such a manner that they stay aligned with the sun. The light they emit is then reflected onto a towering central tower, which resembles a twinkling needle in the surrounding stark desert landscape. Inside this tower, the concentrated rays of the sun heat up liquid salt (made up of a mixture of potassium and sodium nitrate) to temperatures of over 1,050 degrees Fahrenheit (or 566 degrees Centigrade). Salt has the capability of retaining high heat levels and this essentially makes it an efficient thermal battery.

The operators in the facility utilize the stored heat to power a regular steam turbine, and the power generated can then be fed into the grid and distributed by utility companies when needed.The hot molten salt is stored in another insulated ground tank the rest of the time. Crescent Dune can keep on producing electricity for ten hours after sundown. It is the only facility in the world that uses a molten salt tower to generate power on a scale that can be distributed this way. The entire process does not produce hazardous waste and results in zero carbon emission and the electricity generated by the facility(110 megawatts) is enough to power 75,000 homes.

In addition, it is able to store 1100 megawatt-hours of energy and this aspect differentiates the facility from other giant solar projects. The stored power can be used when it is most needed, including nighttime and cloudy days. This represents a major advancement in the technology of renewable energy since it avoids wasting of electricity that can happen if it is generated during sunny periods when it is not needed.

The Crescent Dunes Solar Energy Facility started commercial operations at the end of 2015, and it is a triumph for US-developed technology. Its production capacity is twice that of a traditional PV (photo-voltaic) solar thermal facility of the same size. In terms of energy storage costs, molten salt technology is 90 percent cheaper than using batteries. Further, it uses hybrid dry cooling technology that significantly reduces water consumption when compared to the conventional power projects. The storage technology was designed by SolarReserve, and it removes the need to have standby fossil fuel energy like natural gas to sustain operations when there is reduced sunlight. As might be expected, the technology is not flawless. It can only be efficiently operated in areas that experience continuous, intense sunlight, and the concentrated sunbeams can burn and kill bird-life.

The construction of the facility created thousands of jobs and injected over $750 million into the Nevada economy. SolarReserve has plans to construct similar plants in China, Southern Africa, and Chile. It is expected that these new plants will take considerably less time to build and cost up to 30 percent less than the Crescent Dune facility. This would make the technology able to compete in the ever-changing energy market that is currently flooded with cheap natural gas. It would also help to ease fears about climate change caused by human activities.